I'm doing some updating to this site, so I'll apologize if anything wrong happens. I'm working on it now, so stuff might slip through unedited. But I'll get it right eventually. A lot is changing.

I knew a girl in high school named Elaine Patterson. Her brother Bob was a pal, and hung out with our crowd of bluegrass pickers and other weirdos, despite his being an athletic type. His nickname was “Breathless,” and he and his sister were good-looking people.

When Bob came by to visit with me when our tour took me to Phoenix, where he lived, Linda Press asked me later if I was lying about his being in my high school class, because he “looked so much younger.”

I knew Elaine, but she was a few years younger, so we weren’t really close. We connected a year or two ago, and had a great phone chat and made plans for more.

That won’t happen, because Elaine passed away recently. It turns out that the genes that made her so attractive also predisposed her to Multiple Myeloma, which eventually caused her death.

When I talked to my friend (another high school chum) Charlie, we discussed her career as an attorney in New York, and he said, “You know Elaine had a book out, right?” 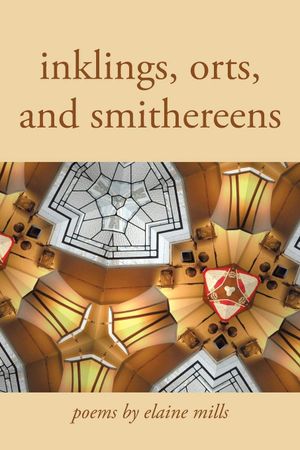 I didn’t know. I tracked it down and read it a . “inklings, orts and smithereens” is a book of poems, and rather extraordinary ones, too.

I thought I knew Elaine, but it turns out I didn’t really know her at all. The poems were a revelation, making art, as others have done, out of growing up in Indiana.  But better than most have done it. Reading it made me wish I could go back and meet her again, so I could slather her in praise for her writing, her insights, and her wit and wordplay.

Longing is vastly overrated;
so is having, as a matter of fact.
Being, on the other hand:
there's not enough of that.