Where credit is Due 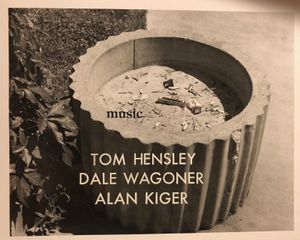 My college degree is in the field of radio and television. That’s what they called it then. It’s now the Media School, but it still authorizes me to operate the remote control whenever necessary.

At the beginning of my Freshman year, I co-produced a comedy TV special with a professor named Jack Sheehan. It was called “Non Sequitur,” and we were noticeably under the influence of Ernie Kovacs at the time—and possibly still now.

The reason I bring this up now is that I came across this card from the credits for Non Sequitur. I know who I am, and I know who Alan Kiger was (a great bebop trumpet player from Indiana who was part of the original George Russell Sextet), but I have no memory whatsoever of who Dale Wagoner is or was.

I’ve done the obligatory online searching that one does in these cases, and I found there are a lot of Dale Wagoners out there, none of whom seem to be this one. If you are or know who is or was Dale Wagoner, let me know so I can decide whether I need to brag about having worked with you or him. Or could Dale have been a woman?

As far as I know, there are no kinescopes of Non Sequitur.